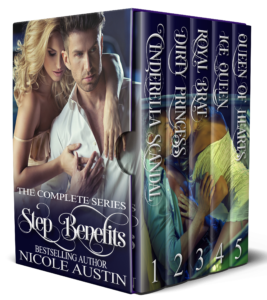 Scroll down for blurbs

It was a onetime indulgence—a random encounter between strangers. A good girl’s dirty little secret with the bad boy. Anything else is forbidden. Or is it?

I’m sure there’s a rule in the friend code that makes lusting after your bestie forbidden. But if giving in to this off-the-charts chemistry is wrong, I don’t want to be right.

Loving two men got me exiled to a foreign country. Without them I’m lost and alone, cast adrift on turbulent seas without a compass or rudder. In order to finally be together we’ll have to navigate a course through the bomb infested waters of my traumatic past.

In school, he was the bad boy this good girl couldn’t have. At work, he’s the boss, I’m his intern. Oh, and his dad just married my mom. It’s so wrong. We shouldn’t be doing this, but I love it.

One CIA operative on a mission to take down human traffickers. Three former Army Rangers out to reclaim a cache of stolen weapons. When their worlds inevitably collide it’s taboo, forbidden and explosive.